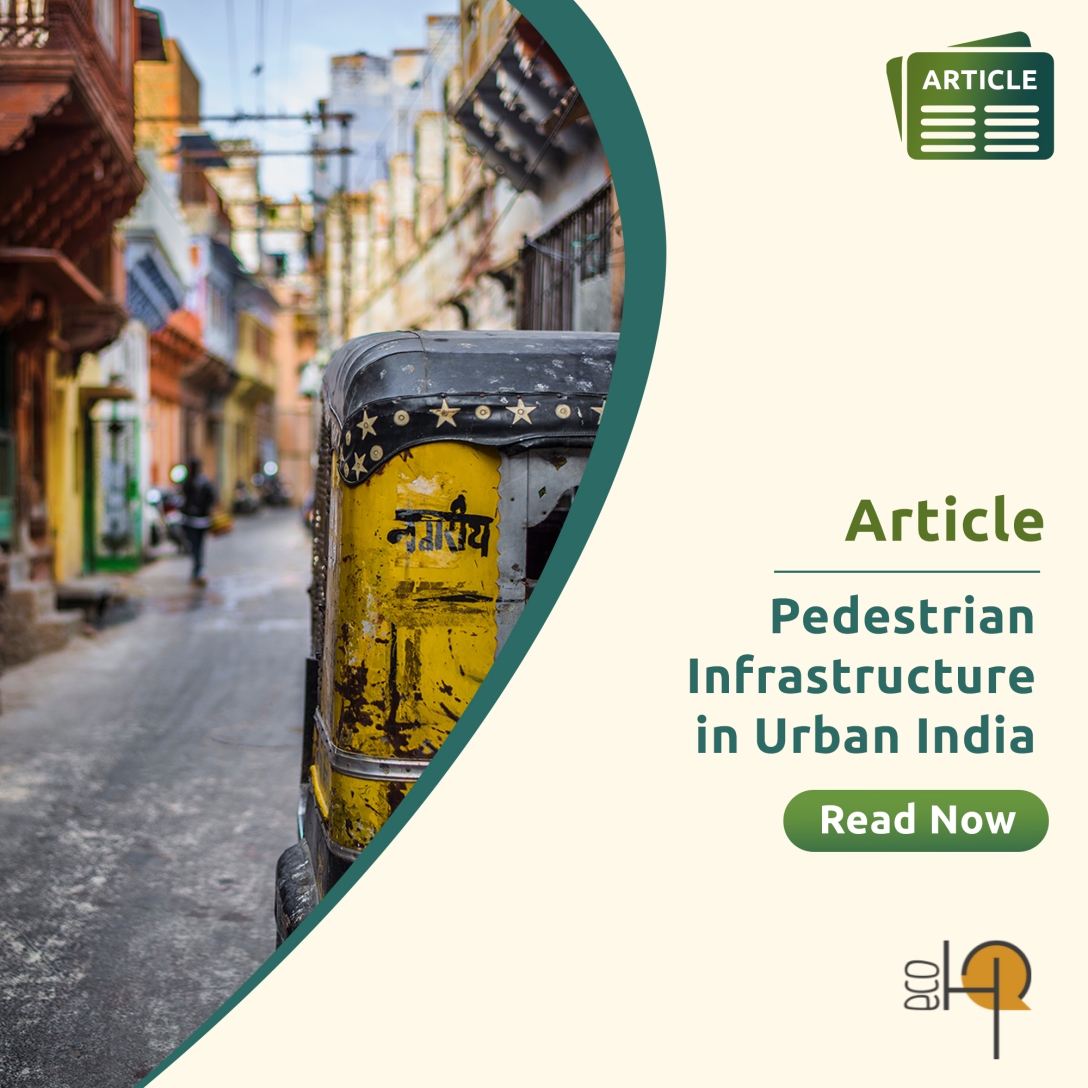 I was born and brought up in Sangam Nagri, Allahabad (now Prayagraj). As a child, I didn’t have access to well-developed infrastructure. It was only when I moved to Chandigarh for my internship in Architecture, I realised what a city should look like. It started off with observing the streets, traffic, ways people commute, lush greenery, huge crossroads, and most importantly – the sectoral planning.

I was fortunate enough to work under the wings of Ar. Sangeet Sharma, partner architect at SD Sharma & Associates. Chandigarh was developed and designed by Le Corbusier and Ar. SD Sharma was one of the lead architects on the team. Being part of the firm which had been closely involved in development of the city was an enriching experience. I heard stories about Chandigarh and the process by which it was developed. It led me to undoubtedly appreciate many aspects of the city.

But one key factor made a significant impact. Pedestrian infrastructure and walkability. To some, it might seem trivial but to me, it was a big deal – to walk uninterrupted and safely. No wonder that the walkability index of Chandigarh is the highest in India.

I never took an auto or vehicle. I just walked nearly a kilometre to the office, every single day. Ever since then, I prefer walking over motorised modes of transport. But one person’s experience isn’t enough. The availability of this pedestrian infrastructure is scarce.

Pedestrians are often the most vulnerable and ignored users of roads in our country. They’re more prone to road crashes and mishaps. Unavailability of proper walking infrastructure adds to the woes. The concept of complete streets in our country still remains a dream. Congestion has increased tremendously, resulting in construction of wider roads and flyovers.

While the above developments are seen as symbols of world-class cities, the scenario in India is far from it.

Our roads are damaged. There are open manholes which result in deaths and some states are particularly affected. Footpaths, if they’re present, are occupied by street vendors, parked vehicles, stray animals or electricity poles. Their surfaces and heights are also uneven. Landscaping is absent. Crosswalks are missing. Speed of vehicles isn’t regulated. Traffic lights are missing.

Pedestrians are expected to use foot-over bridges and while that government has invested heavily in them, they’re mostly unused. Moreover, needs of the elderly or specially-abled are dismayingly overlooked.

All of the above factors lead to jaywalking. And not to forget, an increasing number of accidents.

What can we do?

If we develop better pedestrian infrastructure, we can give people opportunities to be less dependent on motorised transport, thus, opting for Non-motorised Transportation (NMT). NMT is a sustainable way of transport, further helping to reduce carbon emissions.

Improved walkability doesn’t just have environmental benefits but also health benefits. In an era where a sedentary lifestyle is the norm, people can opt to walk and stay active. Cost savings on transportation is the cherry on the cake.

The need of the hour is to strengthen our infrastructure and prevent accidents while promoting the use of NMT. Strong and evident transformations will make the ‘walking experience’ enhanced, smooth and more convenient.

After the pandemic hit us, a shift in road user patterns was observed. Commuters avoided public transport, opting to walk or cycle. Many cities adopted new approaches to make roads friendlier for people.

The southern Indian city of Chennai developed more than 100 km (62 miles) of pedestrian-friendly streets. Chennai has drafted non-motorised transport policies to create footpaths along 80% of its streets. Alongside this, infrastructure for cycle lanes was made available, with the vision and commitment to prioritise people over vehicles.

Considering the challenges of road safety in our country – from narrow unplanned streets to multiple governance authorities and decision-makers – this is definitely not a change that can be brought about overnight. But having a shift in focus and institutional coordination can be major gamechangers.

There are several pilot projects currently active in India. Scaling up these projects is crucial. City-level initiatives are much needed. And all of this is possible only with the help of the government. It’s high time that policymakers emphasise on ‘roads for people’ rather than ‘roads for vehicles’. It benefits not only the vulnerable NMT users and street vendors but also helps achieve goals of an inclusive and low-carbon future in India.

Ria Kapoor is an architect, planner, and entrepreneur.  She has expertise in Urban Planning. She did her Master’s from the School of Planning & Architecture, New Delhi. She has worked as a consultant in Urban Development Projects. She has worked Assistant Professor and educated the students of Masters of Urban & Regional Planning. Currently, she is working as a freelance writer and researcher.
She believes in policies and interventions which are inclusive and promote sustainability. Her key interest has been designing for the less advantaged or often ignored section of the society like the elderly, the children, the specially-abled. 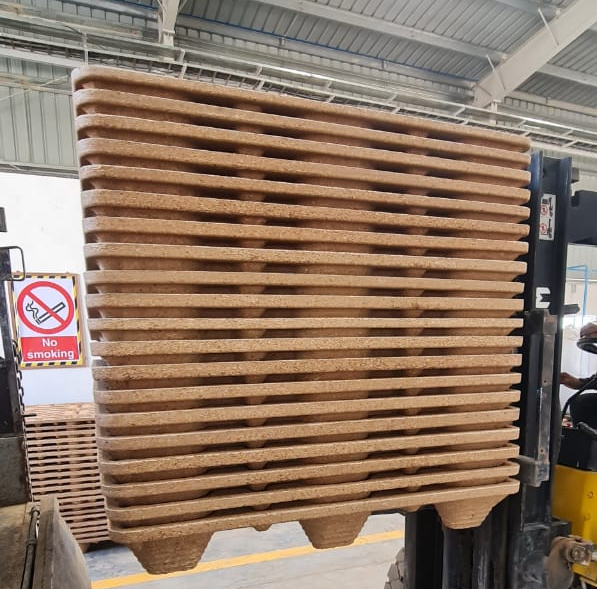 Imagine cutting a tree every time you transport cargo!

Every year millions of trees are cut to make billions of wooden pallets. What’s worrying is that for sea and air cargo, these pallets can be used only once.

Makes us wonder, why are we using an option that contributes to environmental damage every single year? Do we not have better alternatives for transporting our goods, especially with technological and infrastructural advancements happening globally?

To answer these questions, we first need to look at the Pallet Industry’s progress over the years.

How Pallets came to be

The history of pallets dates all the way back to Ancient Egypt, where there were indications of wooden skid-like structures used to store the construction material.

In 1920, Clark Equipment Company, in the US, patented the first forklift. It was followed by Howard T. Hallowell who submitted the first patent for pallets under the name of Lift Truck Platform. But it was only in the 1960s, in Europe, that a uniform quality and size standard was established, which remains in use today.

Currently, APAC countries source Pinewood, one of the most common materials used for pallets, from  countries in North and South America because of its scarcity. These imported wood-based pallets transport goods across the world. Amidst all this, the quantum of damage that’s done to the environment is just astonishing.

This brings us back to our original question –

What are the alternatives?

Patents for plastic pallets were filed in as early as the 1960s. But it was only in the latter half of the 20th century that plastic pallets picked up momentum owing to their superior benefits over wooden pallets.

Plastic pallets can carry much more weight depending on the quality of plastic granules used as raw material. They also last for more than 3 years, which takes away the headache of re-purchasing pallets, especially for warehousing.

But every benefit comes with a price and the same is with plastic pallets, too. They are typically 3 to 5 times costlier than their wooden counterparts. The pricing is not the biggest problem here though. APAC countries need to solve the establishment of a Reverse Supply Chain Model which ensures that these pallets do not end up in dump yards, further adding to the problem of plastic waste.

Wooden and plastic pallets, along with lesser known options like metal and corrugated paper pallets, are not in line with the UN’s climate change goals because of material sourcing and non-recyclability constraints.

But there’s hope. Early 2010 saw research done to replicate the process of ‘Particle Board’ manufacturing for pallets as a single mould using waste wood.

Newsflash! The technology is market ready and already being tested by few players worldwide. The pallet manufactured using this method is called Compressed Wood Pallet, with features that cannot be missed:

While all these features look fantastic, there’s more!

Based on my extensive research, apart from using waste wood as a raw material, other elements with similar technical properties can be used to make Compressed Pallets, too. Imagine using waste material for manufacturing pallets which, after their use, can be recycled to make more pallets. How exciting and impressive is this technology!

The Logistics industry has seen several advancements with Information Technology, aimed at process improvements in document sharing and storage, shipment/freight tracking and queue management, inspection and quality checks, traceability and visibility. But it’s high time that innovations are made on the hardware front as well, to check our impact on the environment.

I am driven to introduce the Industry to the alternative they never had!

Abhijeet Parmar, Founder of Senergy Pallet Pvt. Ltd, is working to introduce Eco-friendly Logistics Pallets in Asia-Pacific Region. He aims to bring the focus on outstanding clean-tech startups of India. ‘It’s not just that we have a huge talent pool in our country but it is also the need of the hour’, says Abhijeet.