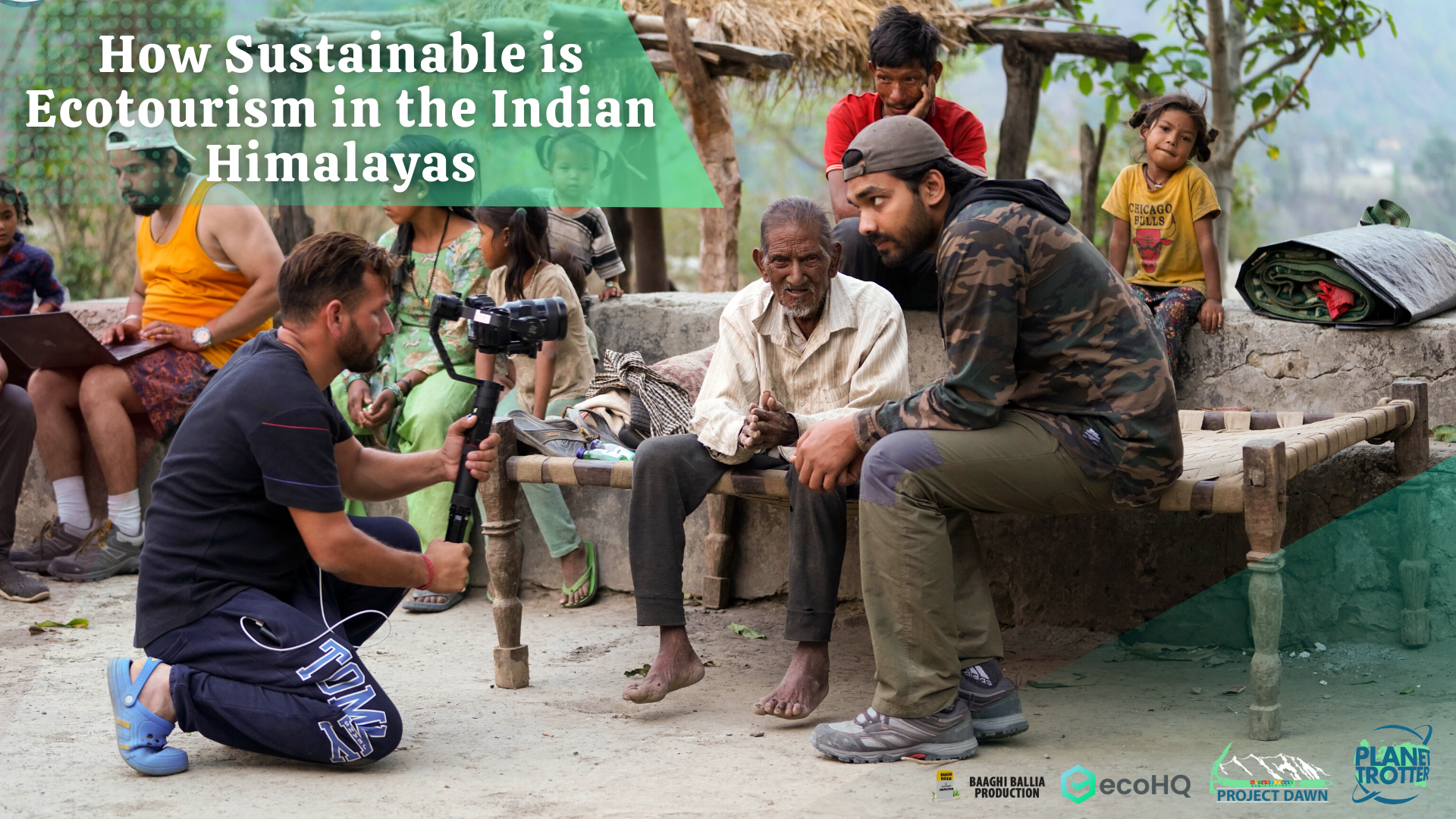 How Sustainable is Ecotourism in the Indian Himalayas?

The article discusses the challenges faced by the Rural Himalayan Regions in India and how Planet Trotter is empowering these communities through Project Dawn.

The Himalayas are India’s most prominent geographical feature. Indisputably, no other mountain range in the world has impacted people’s lives and influenced the fate of a nation.

These dynamically young mountains are not only crucial from the standpoint of climate. Instead, they act as a provider of life, giving water to a large part of the Indian subcontinent. Besides, they also harbour a wide variety of flora, fauna, human communities and cultural diversity.

However, the Eastern Himalayas today face several serious issues that threaten the region’s environment, biodiversity, and human livelihoods. The rapid influx of people and resources into and out of the mountains worsens their challenges.

Despite the abundance of natural resources, most people in such regions are marginalised and still live on a subsistence level. The ruthless exploitation of natural resources leads to increasing environmental degradation and compounding the impact of natural hazards. A paradigm change is urgently needed to restore the balance between economic interests and ecological imperatives while considering socio-cultural values.

Many mountainous regions are experiencing a swelling solid waste problem. On hikes and mountaineering excursions, tourists add to the rising volumes of solid trash in many more isolated and higher mountain areas. While there are no suitable waste management mechanisms in place – they discard the waste in the open. As a result, littering along tourist trails and open rubbish dumping in valleys and streams have become prevalent. It poses serious public health and an environmental threat as well.

In addition, waste collection and safe disposal in the alpine landscape are more complicated than in the urban lowlands. The reasons for the same are—the harsh climate, isolation, restricted land availability for waste treatment and disposal, and comparatively weak infrastructure. However, despite the challenges, the unique topography and climatic condition of the Himalayas require a specific approach to solid waste management.

While many local communities have tried to manage the waste problem, they still face significant challenges in managing growing inorganic waste. There is the unavailability of an existing system in rural or urban areas to collect, transport, process, and dispose of plastic waste. Moreover, these communities have not developed new practices (recycling) and norms for managing solid waste.

Natural springs contribute 90 per cent of the drinking water supply in Uttarakhand’s hilly regions, according to a Niti Aayog report on ‘Rejuvenation of Springs in the Indian Himalayan Region’. However, unfortunately, these are also drying up due to significant environmental degradation.

The degradation of water bodies invariably affects wetland ecosystems and reduces the general retention capacity that helps prevent flooding. Moreover, when the quality of such water bodies is not maintained, this, in turn, causes impairment of urban drainage and flood management systems.

The problem of water scarcity has given rise to another big problem—migration. Urbanisation has pulled people away from rural areas in the HKH region into nearby areas.

Mountains are generally considered remote areas, as many are difficult to travel to, roads are scarce, and there is limited accessibility due to weather conditions. Therefore, we think that humans and being free of pollution have little impact on them. But unfortunately, human activities like mining, livestock, energy production and tourism impact them.

Unfortunately, the economic status of the rural Himalayas is very disappointing as several people there do not have access to improved sanitation, healthy food, and primary education. Additionally, hunger and malnutrition are widespread in the Hindu Kush Himalayan regions.

According to a study on the hygiene behaviours of women in the Himalayan foothills, 35 per cent of women still do not buy sanitary napkins from the market. Factors like illiteracy, lack of family support and finances, and ignorance contribute to women’s poor perineal hygiene practices. Project Dawn, an initiative by Planet Trotter, has supported the women of these areas by distributing sanitary napkins and promoting awareness about menstrual hygiene. However, still, there is a need for health education programmes to spread awareness regarding the maintenance of hygienic practices.

To add on, increasing demands by numerous forest dwellers often lead to conflict over resource use between the rural poor living at the periphery of protected areas and the state. Unfortunately, this issue of poverty, loss of biodiversity, and declining ecosystem services remain largely unaddressed in the Himalayan region.

Building a Viable and Sustainable Economy

One cannot overlook the Himalayan population’s social and economic growth. However, building a sustainable Himalayan economy would require the local people to be educated. Furthermore, if the inhabitants of the Himalayas were better educated and more conscious of the geological vulnerability and ecological fragility of their mountain home, they would surely force more compliance with laws and regulations to protect it.

Undoubtedly, students who know about their environment feel more attached to their homeland, enabling their reverse migration and smooth reintegration with their community. Companies like Planet Trotter, with initiatives like Project Dawn, have contributed to this aspect by providing solar panels to rural schools. Undoubtedly, access to electricity is a part of the basic infrastructure requirements to provide quality education at schools.

Until now, we have not seen much data that captures the migration of Himalayan youth back to their villages. However, the availability of education is that double-edged sword that makes the regions strong and sustainable.

An urgent issue to be addressed is good governance in the allocation and management of water. Unfortunately, the policies are lacking in most areas due to corruption and multi-level conflicts.

While planning new water distribution and management plans, the Government must consider climate change projections and their impacts. Without such consideration and necessary mitigation measures, the new projects will not be sustainable. They may fail miserably as water availability at the source is declining at an alarming rate.

Every Himalayan state has attempted to leverage the region’s distinctive products as a source of economic power. For instance, Sikkim has declared itself an ‘Organic State,’ recognising the possibility of maintaining its agriculture organic. However, Uttarakhand, which has a similar topography, still lags in going fully organic. The lack of organic manure, limited marketing links, and a dedicated policy to promote organic crops by establishing a minimum support price (MSP) for cereals are significant challenges for Uttarakhand farmers.

The MMAP Project by Tata Trusts and The Hans Foundation is a commendable initiative that aims to improve the quality of life and income from agriculture for 1500 farming families in 15 villages in Uttarakhand.

Ecotourism That Safeguards the Local Community

The most obvious path to economic development in the Himalayas is through the high mountains, adventure, biodiversity, and environmental tourism. However, tourism is heavily reliant on the region’s ecosystem. Tourism will suffer if the ecosystem suffers. On the other hand, tourism has environmental consequences if not appropriately managed. The Himachal Pradesh Government’s decision to develop 113 sites to boost ecotourism is a fantastic approach to the cause.

We must learn to establish sustainable models for pilgrim-based tourism in the vulnerable highlands, as the Uttarakhand flood has taught us. Most high Himalayan tourist destinations have pollution, litter, and solid waste disposal issues. Construction activity is unregulated, and hotels and lodges are frequently built in vulnerable regions.

The transition to ecotourism must be carefully fostered so that best practices can be learned and spread. Most importantly, the tourism industry must benefit the local community. For example, in Leh, where the Government has actively promoted homestay tourism, there is a greater focus on reducing pollution and conserving the environment. We need such measures to boost mountain tourism for the benefit of the local community.

The Himalayan cities are growing and showing signs of the same rotting as the lowland towns. There are heaps of rubbish and plastic, untreated sewage, chronic water shortages, unplanned urban construction, and even local air pollution caused by vehicles. These cities must be managed, especially in light of the influx of tourists and that visitors do not pay for municipal services.

Many states, including Himachal Pradesh, have tried various approaches, ranging from banning plastics to taxing tourists. The funds raised are utilised to improve infrastructure and compensate for tourism’s negative environmental impact. However, they require assistance and innovative thinking in all areas. These include building educational institutes, modernising architectural practices, local water management through lake preservation, managing various sewage systems and waste management.

Given the ecological fragility of mountain locations, careful planning for urban growth and spillover into newer communities is critical. For instance, India’s National Action Plan for Climate Change (NAPCC) focuses on sustainable development in mountain regions.

In addition, it is necessary to develop plans for the consolidation of urban settlements before the Government authorises further growth. This growth should be guided by land-use planning, must be included in the municipal master plan and must be provided with all facilities. In other words, uncontrolled and unmanaged urbanisation should be prohibited. All of this will need robust regulatory institutions in the cities.

While global warming makes headlines, many other impacts on the fragile mountain region are less apparent. In the Himalayas, the human population is rapidly growing, as is the rate of landscape change required to support it. Therefore, we emphasise the need to educate, empower, and enable the marginalised communities to sustain themselves in the long term.

Various policies and projects are already in place, but a holistic approach from the Government would bring us nearer to sustainable development. It will also ensure a better quality of life, improve economic status, enhance the quality of life-support systems, mitigate the adverse effects of environmental disasters and build resilience in communities.

The beautiful and picturesque Himalayas have supplied enormous ecosystem goods and services in the past and will, in the future, with proper planning and management.

Planet Trotter is bringing responsible travel solutions while providing the adventure of a lifetime. We have dedicated to socially and environmentally friendly adventure tourism and protecting and preserving the alpine surroundings. To execute our vision of remote rural development, we have set up projects that assist local conservation and abide by the regulations that ensure the mountain environment and its inhabitants continue to evolve and be protected. Planet Trotter empowers and inspires people to explore the wilderness areas while being the advocates for their protection.

Nikhil Singh is an engineer turned adventure expert who wants to leverage sustainable adventure tourism’s demands to uplift isolated, marginalised communities in India. He is the brand ambassador and global council member of UNAccc for 83 countries.

As an environmental activist, he aims to create more advocates for the environment through outdoor and adventure sports. In addition, Nikhil campaigns for positive change in the ecosystem and works towards building self-sustainable and resilient rural communities by generating income sources for them.

Project Dawn is an initiative by Nikhil Pratap Singh to transform people’s lives in rural communities. The project seeks to be the daybreak for these communities by promoting awareness, building a revenue pipeline, generating employment, and improving learning opportunities.

Ravi is an evangelist for sustainability and an agent for change who thrives on creating an impact with his words. Professionally, with his expertise in end-to-end marketing, he helps to grow businesses (that are conscious of the ecosystem).