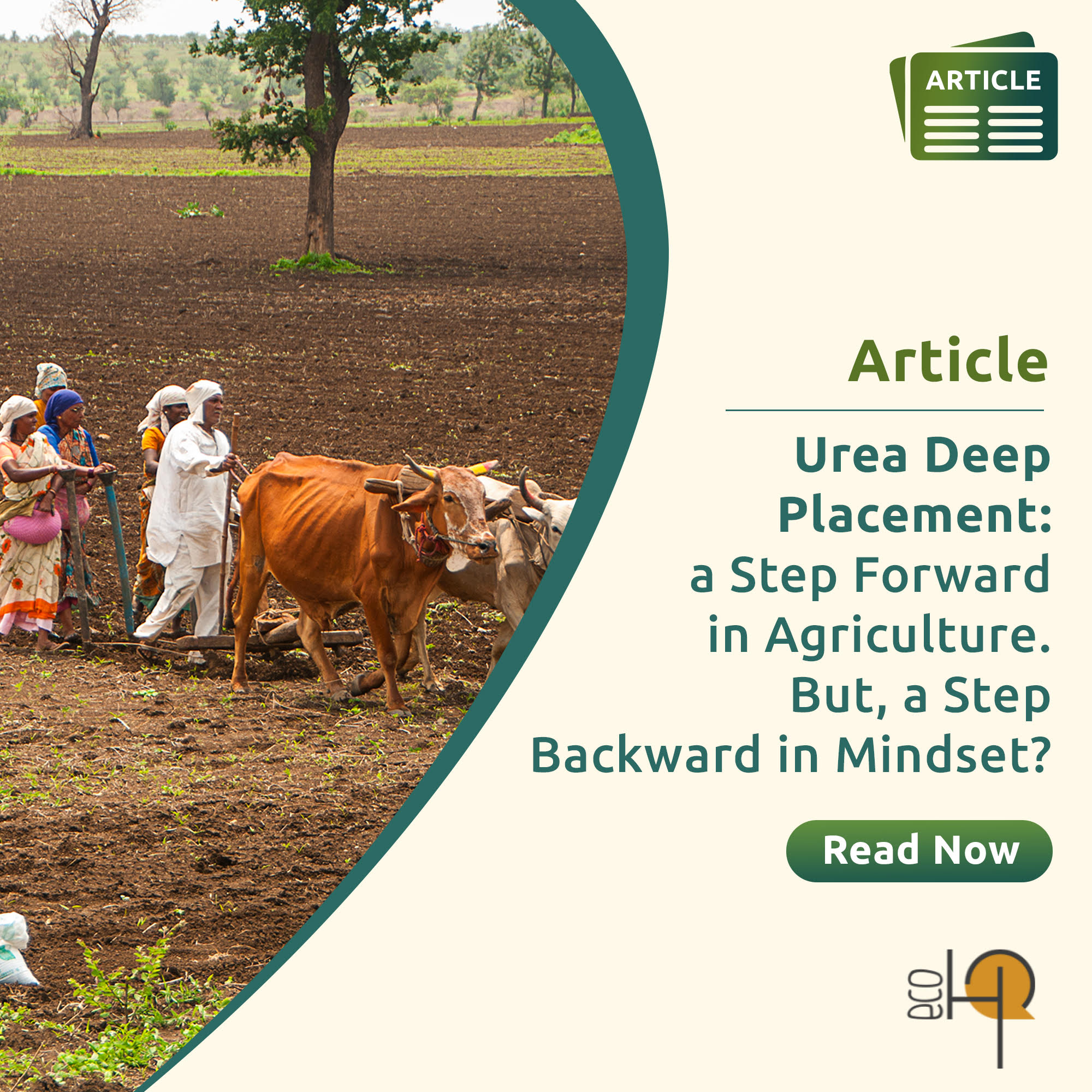 Urea Deep Placement: a Step Forward in Agriculture. But a Step Backward in Mindset?

In August of 2019, my colleague, Yuva, and I set out on a journey to visit the rice belts in Tiruvarur and Nannilam, located in Tamilnadu, South India. Our goal, to spread awareness about a fertiliser usage technique called Urea Deep Placement.

Here’s what it is

Urea is a fertiliser that is used along with two others called potash and DAP (Diammonium Phosphate) to ensure the productivity of rice crops. The amount of fertiliser used depends on factors such as the season, type of crop, and soil conditions, to name a few. The Indian government subsidizes the price of urea to make its usage economical for Indian farmers.

Today, urea, which boosts the nitrogen content of the soil for effective growth of rice crops, is applied using a technique called ‘top spreading’. But this technique has a few notable drawbacks:

Urea Deep Placement is a technique wherein urea pellets are inserted into the soil at specific intervals depending on the acreage. This technique consumes a lower amount of urea and doubles the rice crop’s productivity.

The lessons we learned

Yuva and I landed in Tiruvarur the night before, and visited the Panchayat office the following day. After having spent over an hour at their office, we were redirected to the most influential farmer in Tiruvarur. We had prepared ourselves for a few challenges because of the attitude of the people towards us while we travelled in buses during our visit. However, we never anticipated the level of resistance that came.

People belonging to the generation cohort of ‘Baby Boomers’ invested their life into agriculture. But it barely resulted in any profit, hardly ensuring their survival. So, they provided their children with academic education to make sure they had a better standard of living. However, the kids, belonging to the generational cohort of ‘Gen X’, returned to agriculture because of the potential they saw in it.

The ‘Middle Men’ (Gen X) grew up watching their parents work in agricultural fields, using certain methods. What they didn’t realise is that observing their parents do the work is not the same as doing the work themselves. They resisted change because of their unconscious biases towards these old methods.

Our voices didn’t matter. After a lengthy conversation that lasted for four hours, we convinced them to test out the urea pellets. Though they were willing to test it out, they disliked women voicing their opinions in front of men and insisted on talking to a male figure before implementing it.

The ‘doers’ however, deserve recognition for keeping an open mind. After observing the discussion for quite some time, the ‘doers’ — men belonging to the generational cohort ‘Baby Boomers’ — decided to implement the technique.  They said they had used a similar approach by wrapping urea with newspapers. To them, this method seemed more sensible.

After 6 months, we gave them a call back to follow up. They sent us pictures after implementing this technique in rice crops and cotton. The technique had yielded the results we wanted, but to our surprise, they did not acknowledge the difference. It was most shocking.

I realised that though the technique had its own disadvantages to overcome, the biggest challenge was changing people’s attitude and mindset towards creating change. Talking and observing is different from doing something hands-on. And the Middle Men’s lack of practical experience stunted our efforts.

Today, sustainability is the talk of the town. While implementing sustainable solutions comes with its own challenges, irrespective of what issues are addressed through sustainability,  it’s our mindset that needs resetting first. It is, after all or in this case, before all, the most significant problem to be solved.

After having graduated from University of Arkansas with a Master of Science degree in Operations Management, Manasa Sai Sekar, gave up working in Fortune 500 companies to pursue her passion. Her entry into the environmental sector was accidental and she’s now working towards breaking unconscious biases in her own way. Being an Instagram influencer on a journey to start her own sustainable fashion brand, Manasa strongly believes in being a doer. She advocates research and solutions that can be practically implemented. There’s no stopping her because in the near future, she aspires to do her PhD in environmental science.